by Caitlin Greenwell
in Features
0 0
1

According to Carl Chaney, co-owner of Chaney’s Dairy Barn in Bowling Green, Ky., his family-owned farm and restaurant will soon be serving its famous ice cream “straight from the cow to the cone.”

The addition of Chaney’s own milk to its ice cream mix will take place in 2019 thanks to the creation of the J.R. Chaney Bottling Company, a vision Carl and his daughter, Elizabeth Chaney Lunsford, have had for several years now.

This past year, Elizabeth, owner of J.R. Chaney Bottling Company, has overseen the build of the $500,000 milk processing and bottling facility, which she said will help customers better understand where their dairy products come from.

“People want to support local and small businesses, and I know people want to know where their food comes from,” Elizabeth said. “I think the dairy industry as a whole, we haven’t had the opportunity to really say, ‘Hey, come see where your milk comes from.’ And here, we’ll be able to offer that level of transparency to the public that they felt like they weren’t getting.”

From its herd of 60 milk-yielding Jersey cows, Elizabeth said the bottling company will produce heavy cream, which is the key ingredient to ice cream, as well as: whole, 2 percent, fat- and lactose-free and full-fat chocolate milk for fluid retail sales.

The J.R. Chaney Bottling Company received a Kentucky Proud grant from the Kentucky Department of Agriculture for up to $5,000 to aid in marketing materials, Elizabeth said. Kentucky Proud foods must be raised, grown or processed in the state of Kentucky. 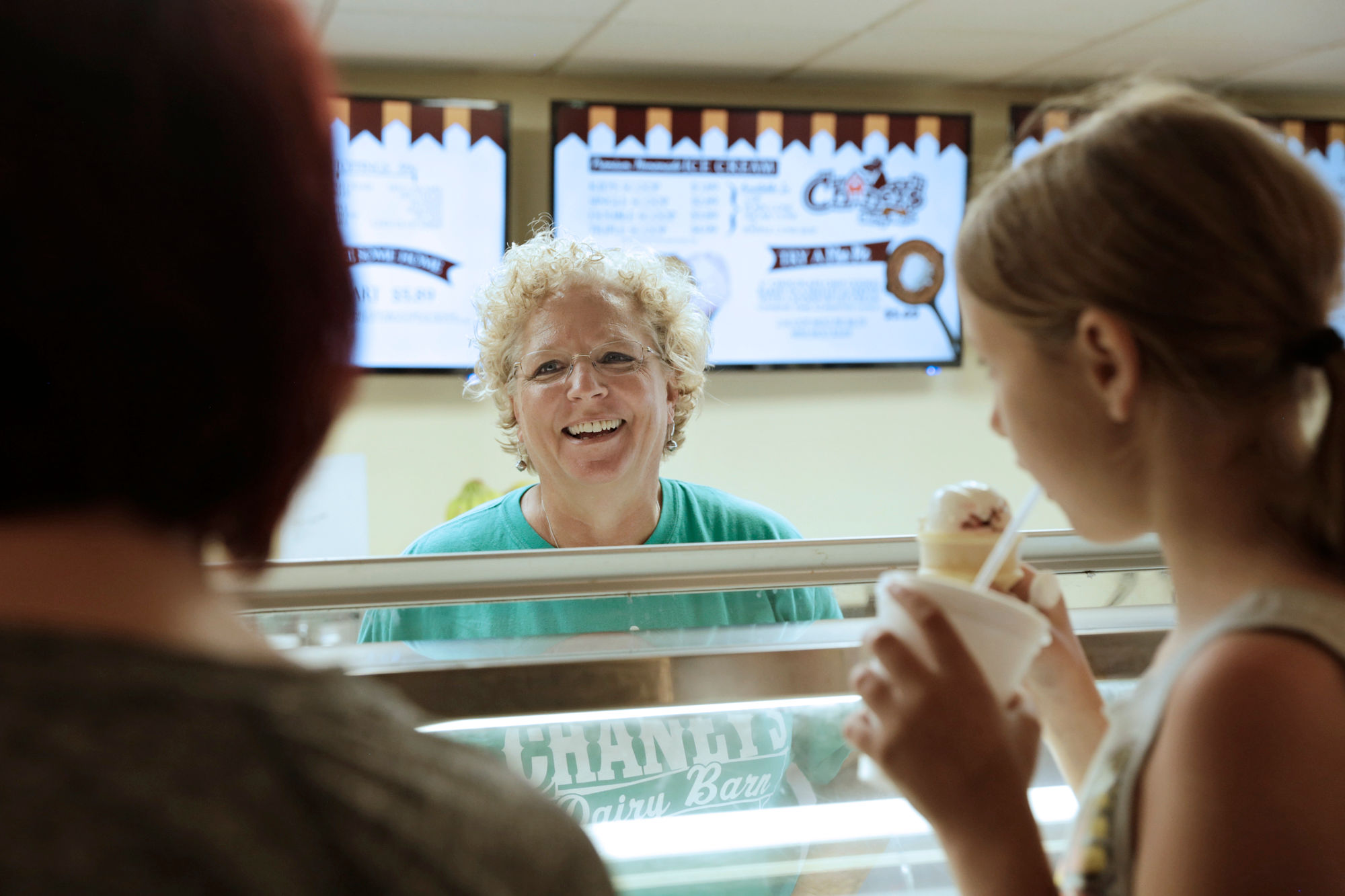 “They sought me out for the grant, knowing I would be a good fit,” she said. “Our product is Kentucky Proud and meets their standards of quality.”

She said the grant paid for half of the production of her milk container labels and part of the graphic design of the labels, which include the Kentucky Proud logo.

Elizabeth said she’s sure Chaney’s milk will stand out from the crowd. Where traditional whole milk is 3.25 percent milk fat, she said their goal is to be 3.5 percent, which will make for a richer product.

“A big piece that’s different is that we have Jersey cows,” Elizabeth said. “They’re higher in protein, calcium and solids. The milk has a different flavor from what you get at the grocery store.”

Carl said nearly one-third of the milk produced from the farm, and processed in the new facility, will be used for Chaney’s own ice cream mix.

“This was one of his visions before he died — to see us bottling our own milk,” she said.

In 2010, the Chaney family tried their hand at bottling their own milk, but ended the project shortly after it began. Elizabeth said, unfortunately, the family didn’t have enough say in the creation of the product and decided to table it until they would have full control.

“We knew there was a market for our fluid milk,” Elizabeth said. “We knew that the community supported it. We would still get emails from people that are like, ‘When are you bringing back your chocolate milk? It was my favorite.’”

Elizabeth said the new, state-of-the-art bottling facility has been determined a Grade A milk plant, which opens doors for more opportunity.

“This means we will be able to sell milk across state lines,” Elizabeth said. “It also means that we will be regulated federally and regulations are a bit more strict.”

Those regulations have opened the Chaneys’ eyes to all of the careful work that must be put into maintaining their bottling facility to the highest standard. Because of this, they implemented a clean-in-place system, Elizabeth said.

“Very skilled labor went into building the bottling facility and this system,” she said. “A lot of people have to break apart their separator and hand-clean every piece. There are hundreds of plates so there is a lot of room for human error. We made sure we went with a system that reduced that error. Bacteria could end our whole business.”

Though it was more costly in the beginning, Elizabeth said she is sure the CIP system will pay off in the long run.

“A lot less physical labor will be involved in the cleaning process,” she said.

Because Elizabeth will be producing a lot of heavy cream for the Chaney’s ice cream mix, she said she will have a surplus of skim milk left over, which is why she will be creating a fat- and lactose-free option.

“This is adding some value back into the skim,” she said.

In addition, skim milk is used in some types of cheeses, including mozzarella and ricotta, Elizabeth said.

Elizabeth’s relationships with local cheesemakers, including Kenny’s Farmhouse Cheese and Western Kentucky University, will allow for them to produce skim-milk cheeses with her leftover product.

“It’s kind of an art to make cheese,” Elizabeth said. “We really wanted to work with someone that was already producing cheese instead of doing it ourselves.”

She said her goal for Chaney’s Dairy Barn, which includes a restaurant, is to eventually serve pizzas and cheese sticks with cheese made from their own milk. 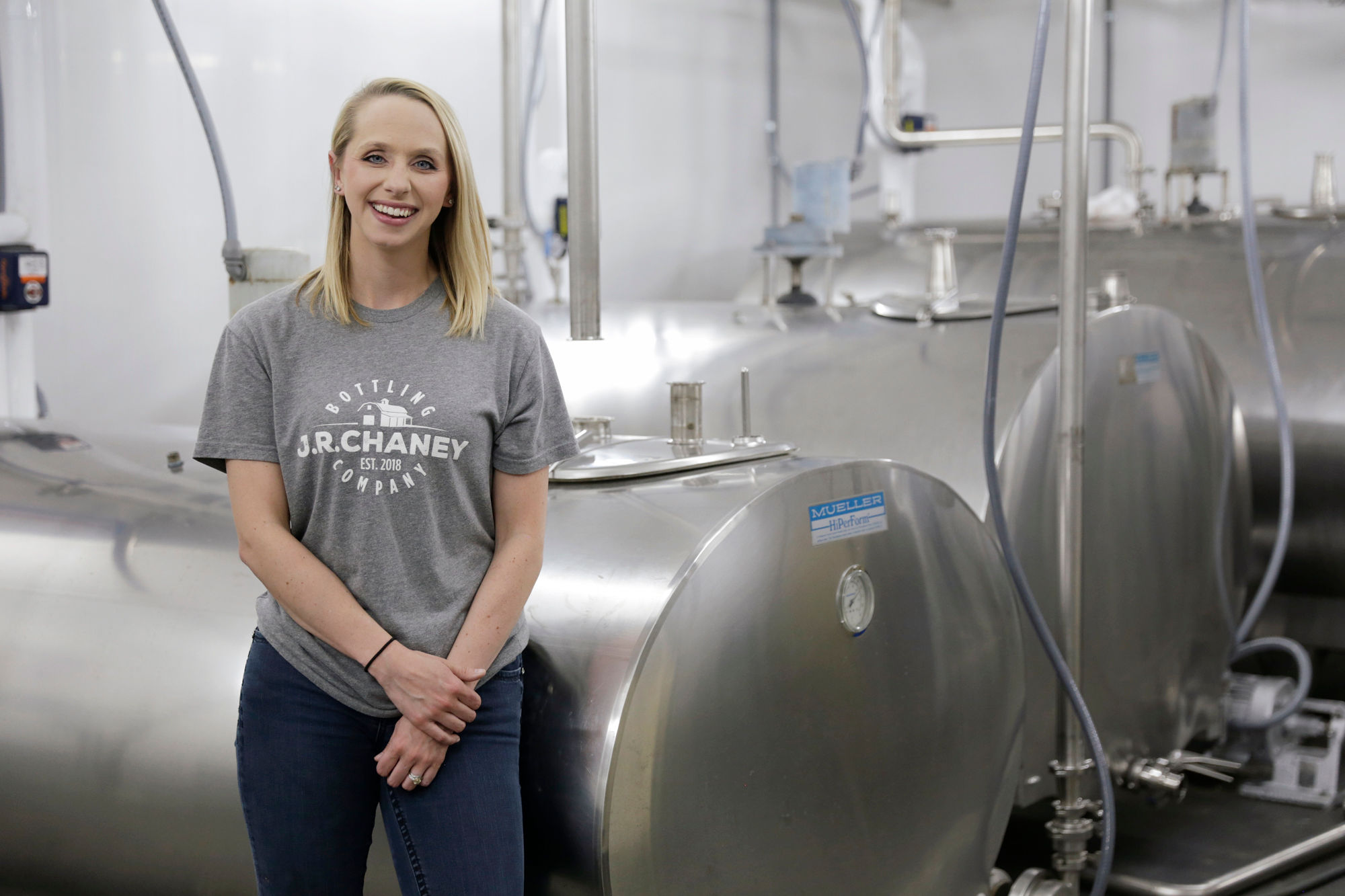 “We will also look into creating yogurts and other skim products in the future,” Elizabeth said.

Elizabeth said she hopes to use 100 percent of the milk produced for her product if all retail partnerships go according to plan. The first day Chaney’s milk is ready for retail, customers will be able to find it at Crossroads IGA and Chaney’s Dairy Barn.

The success of Chaney’s Dairy Barn and the J.R. Chaney Bottling Company can be attributed to the strong familial connection that still runs through the farm, which was founded in 1888, said Debra Chaney, half of the husband-and-wife duo who own Chaney’s Dairy Barn

“We are truly a family business,” said Debra. “We have three kids and three of our grandchildren now have chores they do on the farm.”

Debra said she has memories of all her kids growing up on the dairy farm.

“I have a picture of Elizabeth in a little red Radio Flyer wagon with milk bottles all around her when she was a little girl,” Debra said.

Elizabeth fondly remembers feeding cows with her dad when she was young, she said. Once old enough, she began milking the herd and did so in middle through high school.

The Chaney family’s bonds have only strengthened over time, Elizabeth said. And at times, it was due to hardship.

Chaney’s Dairy Barn opened its doors in 2003 to sell its ice cream. The family began producing ice cream in response to a growing milk crisis. In 2000, milk prices were the same as they were in 1970, Elizabeth said.

“We were just bringing in the same amount of money from product sales before, but the cost of operating had gone up,” Elizabeth said. “There had to be a change.”

In the following months, the Chaney family had to sell some of their acreage and half their herd of cattle.

“We had to figure out how to save the family farm,” Elizabeth said.

“We had to find a way to make this work,” she said.

After two years of research, Debra said she found that a lot of the dairy farms that were doing really well were making ice cream.

“This was the least cost of entry to keep the farm going to finally fulfill our own goal of then bottling our own milk,” Elizabeth said.

Elizabeth, who was just 13 when the Dairy Barn opened its doors, said everyone had to make sacrifices. Debra gave up her seamstress business and began working full-time at the barn.

“Family dinners became Dairy Barn dinners,” Elizabeth said. “It was unfortunate, but at the same time, it gave me a different perspective of this business.”

Upon the Dairy Barn’s success, including its tours, Carl said the family purchased and started using its first milking robot in 2016.

He said the robot suggestion came from a professor at the University of Kentucky. Carl was at first skeptical of the process, thinking it was too hands-off for his family.

“People may think this is silly, but we have a close relationship with our cows,” Carl said. “We’re always around them — we’re always petting them, we’re always seeing them. And I just felt like we would lose that connection with the robot.”

To learn more, the Chaney family visited a robotic dairy in Indiana.

“Once I sat down and talked with the owner, I realized it was actually the complete opposite,” Carl said. “We pretty well fell in love with the system.”

The Chaneys’ farm offers seasonal guided tours, daily self-guided tours and a myriad of special events, including movie nights and the annual Duncan Hines Festival. Debra said many special events bring in upward of 1,000 guests at a time.

Much of the farm’s success can be attributed to the dedication of its workers to make personal connections to its customers, Debra said.

“I think relationship building is very important,” Debra said. “We’ve been able to kind of slow down and realize the importance of relationships and connect with people. If they feel that personal connection, they’ll continue to come back and tell others to visit.”

Elizabeth said Chaney’s Dairy Barn offers an experience people can’t get elsewhere, which will carry over to the milk product.

“It allows people the ability to have family time together,” she said. “We want people to leave with a level of comfort and know that their milk comes from cows that are treated well and that it’s a quality product. People will be able to take that gallon of milk home and have a glass of chocolate milk with their kids over breakfast and have a conversation about where food comes from. I think that’s what this place offers that other places don’t.”

The family’s drive shines through in its product’s consistency, Carl said.

“Why we’ve been successful? That’s really simple. It’s hard work. We put a lot of time in that others wouldn’t.”